February 2015 full moon – freedom from the fetter of views 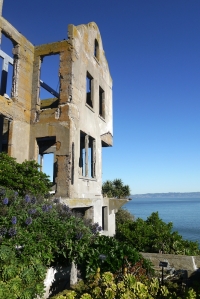 While in San Francisco recently, I had an opportunity to visit Alcatraz island, the former federal penitentiary, 19th-century military fortress, site of Native American heritage and protest, and now one of America’s most visited national parks.  As we walked through the decaying cell blocks, I was struck by the layers and layers of defence that had been constructed to keep what was deemed “unsafe” from being a threat. 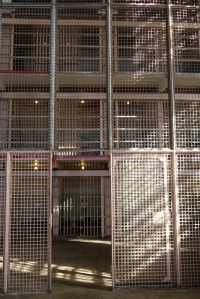 Immense effort had been made to prevent escape.  First, there was banishment to an island: the sea as initial safety barrier.  Then on the island itself, razor wire fences, grilles, screens, mesh, and steel bars, all arrayed to confine those people who had been judged as threats to society.

At the start of our visit, I was awed by how extreme all these external mechanisms of protection seemed.  As the visit wore on, I began to reflect on the internal mechanisms of protection that we all construct, to defend against perceived threats to our existence.  Some of you reading this have had the experience of being physically incarcerated; all of us have the experience of being mentally incarcerated by our own inner constructs, belief systems, and world views, that prevent us from living in the deepest freedom.

In the Buddha’s teachings, this freedom is sometimes described as being “unfettered,” and it comes from understanding how we get caught in …
… a thicket of views, a wilderness of views, a contortion of views, a writhing of views, a fetter of views. Bound by a fetter of views, the uninstructed run-of-the-mill person is not freed from birth, aging, & death, from sorrow, lamentation, pain, distress, & despair. He or she is not freed, I tell you, from suffering & stress.
MN2 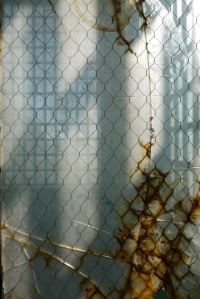 So the first stage in this process of freeing ourselves from suffering and stress is to clearly see the views that are keeping us trapped.  Often, it’s only when we come into contact with people who hold views radically different to our own that we’re able to see where we’re clinging.  This can be confronting, but I sometimes think of vipassana practice as progressively expanding our capacity to just BE with difference. 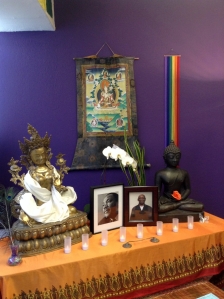 A few weeks ago, I visited the East Bay Meditation Center in Oakland, California, which has made a conscious commitment to being a refuge for all the diverse communities that surround it.  The center recently won an award in recognition of the work that it does “to actively pursue participation by people of diverse classes and races; raise the voices and support the leadership of working class and poor people; and have an organizational culture that draws on the strengths of all class cultures.”

Because the centre serves such a wide range of different communities with sometimes competing needs, they have a set of communication guidelines posted next to the shrine in their main hall to help support skilful relationship.  The first of these guidelines, developed by Visions Inc, is:
Be willing to “try on” new ideas, or ways of doing things that might not be what you prefer or are familiar with.

Mushim, one of the core teachers, explained this guideline as being similar to trying on new clothes.  Can we be willing to try on clothes that are very different from what we might normally wear, with an attitude of openness and curiosity?  She went on to say that just because we try something on doesn’t mean that we have to BUY it.

Something about this suggestion – of being willing to try on but not necessarily buy – has been very helpful for me recently.  I’ve been doing a lot of travelling by public transport in different parts of the world, and often overhear conversations that express views very different from my own.  I notice the inner recoil, and try to remember to just “try it on.”  When I’m able to do this, there’s a softening into compassion; the recognition that we’re all caught in various ways, all prisoners of our own fettered views.  Then this moment of recoil can be a wake-up bell, an invitation to see beyond these rigid bars of identity-view to the freedom that’s actually, always available.

View all posts by Jill Shepherd