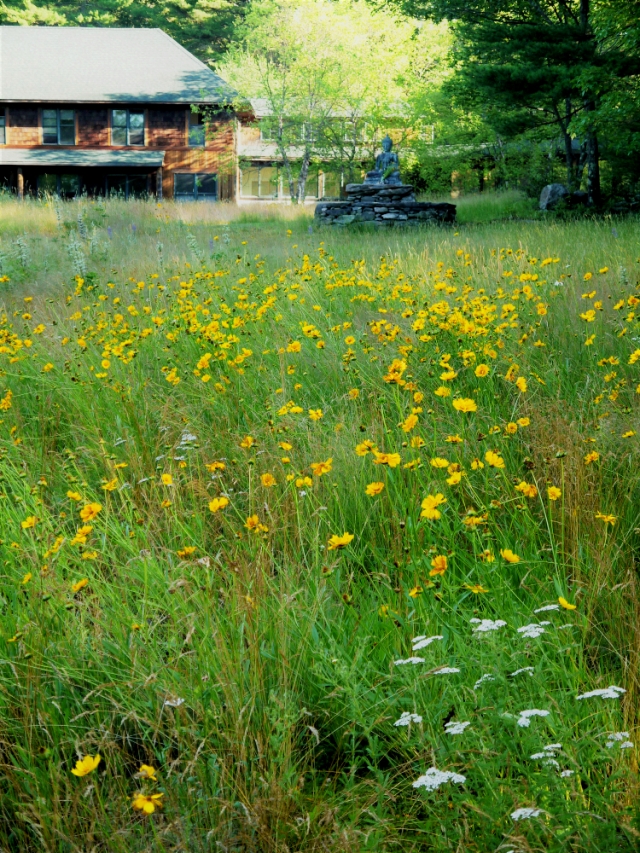 Just last week, I finished a one-month retreat at the Insight Meditation Society’s Forest Refuge in Barre, Massachusetts, led by Sayadaw U Vivekananda.  What a relief it was, to temporarily put down some of the burdens I didn’t even know I was carrying, and to have such a powerful opportunity to “disentangle the tangle” (as the discourses say)!

The challenges and rewards of retreat practice

Being silent and unplugged for a whole month might sound easy – and perhaps for some people, it is – but for most of us it can be surprisingly challenging at times.  As Andrew Holecek, a US teacher and student of Tibetan Buddhism, recently wrote:
Retreat is not for the faint of heart. It takes courage to stop and face one’s mind so directly. But if you want to be unconditionally happy, which is one way to talk about enlightenment, there is no other way. Sooner or later you have to relate to your mind instead of from it. Otherwise you will forever be held captive by the contents of your mind, shackling yourself to every shiny thought that pops up, a prisoner of your own making.

On Retreat, Block All Exits

Even though it’s not always easy to be on retreat, the rewards are immense.  Towards the end of my time at the Forest Refuge the gratitude I felt for this opportunity became quite overwhelming.  I realised that next year will be the 15th anniversary since sitting my first three-month retreat at IMS, and that every year since then (with one exception) I’ve been able to sit either a one, two or three-month retreat here.

The benefits of being able to do this have been so transformative that I started to wonder how to make more-intensive meditation practice available to others.
I know from my own experience that there are many practical hurdles that can make it difficult to sit a longer retreat – not least of which is the financial challenge.
Early on in my own practice, I was only able to sit that first three-month retreat because of the generous scholarship support of IMS and members of the BMIMC community. At first, it was quite difficult to be on the receiving end of so much generosity, because it challenged strong conditioning about being independent and self-reliant.  But when I was able to open to and receive what was being offered, in the spirit that it was being offered, it brought all kinds of unexpected benefits – some of which I’ve written about in an earlier post here:
https://jill0shepherd-insightmeditation.com/2013/09/12/generosity-part-4-giving-and-receiving/

Remembering that experience, I decided I’d like to celebrate next year’s 15th anniversary by offering a scholarship towards the retreat fees of a one-month retreat or longer, at either IMS in Massachusetts, or BMIMC in New South Wales, Australia.  This scholarship will be aimed at making retreat practice available for people who don’t have easy access to it, for financial reasons or due to geographical location.
Here’s the link for more information and to make an application:
https://www.eventbrite.com.au/e/longer-retreat-scholarship-application-tickets-35856045397
Applications close Sunday 30 July.

I hope that this contribution will help benefit someone in the same way that I’ve benefited from others’ generosity.